A couple of weeks ago, my daughter shared a picture of hers from college – there’s a bunch of them with big sunshine smiles on their faces and my daughter is being lifted up by three of her friends. She tells me, you know ma, I am the lightest and so I am the default candidate for being held up for pictures! It reminded me of myself…..

I was thin, horribly thin and underweight and I was short. Let me assure you, my parents fed us well, no doubts on that front! All along in school, I was the shortest or among the five shortest kids in class. My mum, poor thing, tried everything – fed me eggs (I used to throw up, I hated it! She then gave up), made me do pull-ups (that custard apple tree in our backyard knows how much I hung on from it!), she thought cycling would help, then we tried swimming. All this had a positive effect on my sister, who was growing up like any normal child would, but I, nah!

While I did not get key roles in the school play or get to lead the march past (even though I had a voice that made up for my small stature, they always chose the taller girls), all was not lost. My time in the spotlight was during my girl guiding days. I got to play the role of the young boy Baden-Powell. We learnt to build a signalling tower. It was not enough to just build it, someone needed to climb to the platform and actually send/receive signals using morse code. No prizes for guessing who qualified! Scouts and Guides learn a whole lot of knots for different uses. The fireman’s chair knot was one of them. It is used to rescue people stranded on upper floors of a buidling. When you needed a ‘human’ for a demo, you would usually want to use the tiny, weightless person wouldn’t you? I would smile away during ‘rescue’ as I was lowered from the first floor of the building to the ground level 🙂

If you still cannot get your head around how tiny I was, then read this too.

I would not get clothes in my size (those days, they didn’t make a variety of sizes, it was the standard S, M, L), neither footwear (this is still a problem). I learnt to tell people who made fun of me that ‘all nice things come in small packages’ and that ‘small is beautiful’ (SIB). I had a classmate in college who was also tiny like me. For a while we used to call each other SIB 🙂 I was friends with a very tall upper class-man (senior) to whom I tried to explain the SIB concept. He was learning German at that time and told me that SIB in German was ‘Klein ist schon’ and would call me ‘Schon’ after that 🙂

When I conceived, my OBG had only one thing to say – ‘put on weight’. My uncle who is a GP was quite sure I would deliver my child by C-section. I proved him wrong so the second time round he just shut up and did not give me any ‘advice’ and to boot I went through a very short labour both times. My better-half is not a BIG guy himself and our kids’ paediatrician told us quite clearly that two under-weight people will most likely have under-weight children. I was determined to make sure that neither child would be under-weight.

I must say, that at a few months short of turning 20 & 18 respectively, both my kids are two healthy human beings. And if I must complain, I would say that while my daughter is taller than me she is still small as compared to her friends. But then we have no control over the genes, do we? When I sit back and look at them I feel a sense of satisfaction and gently pat myself on the back. I must have done something right….. 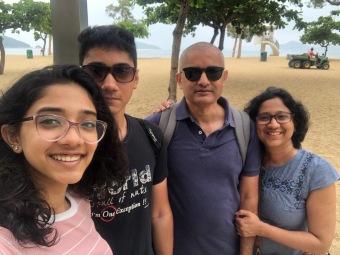