Greece or Turkey asked the better-half. Unusual holiday question from someone who almost always simply picks a country and then leaves the planning to me. Our kids were devouring Rick Riordan’s Percy Jackson Series at that time so it was easy to tell them that we would be visiting the land of the Greek Gods. And thats how the trip came about.

Greece has so much to offer that picking one place over another was becoming very very difficult. After a lot of research, the travel plan shaped into a fair mix of all things Greek.

First stop – Thessaloniki for Byzantine glory. A UNESCO world heritage site, Greece’s second largest city after Athens is dotted with monuments and churches from as early as 2c A.D. In a little over two days, we covered the must-sees.

In the evenings we would stroll along Nikis Avenue and sit and watch the crowds at Aristotelus Square. In the far distance you could see Mount Olympus.

One day we ventured out to the beaches at Halkidiki, the prettiest blue sea, but the waters still cold in May.

A small detour – Litochoro/Mount Olympus – to spot Greek Gods. May is still off-season for trekking. So the little town of Litochoro which serves as a starting point for trekkers was desolate. We drove up a bit inside the nature reserve to feel a little closer to Zeus et al and drove on to our next destination.

Second stop – Meteora – for monasteries in the skies. Well, almost. As you leave Mount Olympus behind you and approach Meteora you are greeted by huge rock outcrops that give you a glimpse of what to expect.

There were several monasteries here, some built as early as in the 11th century, but only six (built around 14th/15th century) have survived and four are still functional. These Greek Orthodox monasteries served as a refuge for hermits from religious persecution. Today these monasteries not only offer spectacular views of the surrounds but are also home to religious icons, paintings and libraries that hold rich old manuscripts.

There are guided tours that will take you to all six monasteries in one day. But when you have kids and like to pace it for them, it is nice to split the visit over two days. The monasteries have strict opening/closing hours and operate only six days of the week. Respect the dress code – no show of arms or legs which means full pants for men and skirts below the knee for women.
I still cannot get over how the hermits clambered up and down those steep rock faces on makeshift ladders and/or ropes that would haul the hermit in a basket. These would be replaced only when they gave away!

Third Stop – Delphi – to meet with the oracle. It was late afternoon when we got here. We gobbled down a quick lunch and headed straight to the sanctuary of Apollo. We did not get the opening hours right, so we needed to hurry up. This sacred site, considered the centre of the earth at one time, is where God spoke to his people through a priestess.
At a short distance away is the Sanctuary of Athena which is open from as early as 7am till 7pm and the entry is free. 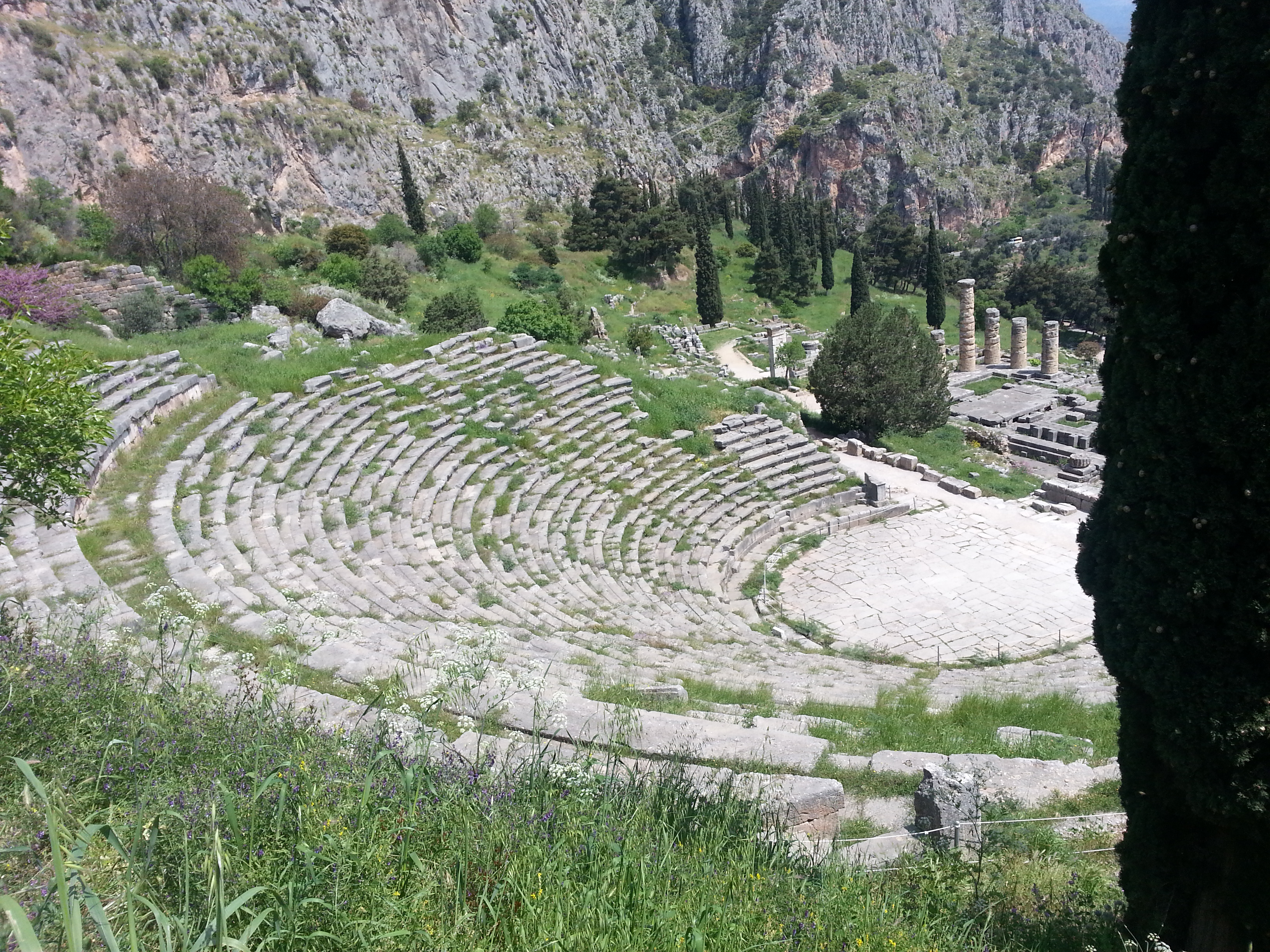 Fourth Stop – Olympia – for the sake of Olympics. Olympia is huge and the ruins are  spread over a few acres. This was the site of the ancient Olympics. There was a temple dedicated to Zeus and his sister/wife Hera. The games were dedicated to Zeus and promoted noble rivalry and fair play. During its heyday the Temple for Zeus had a huge statue of him made of gold and ivory. The complex has separate areas for the games, the teams’ lodgings, a seat for the officials and judges of the games, treasuries and even a place for hobnobbing politicians.

Our next port of call was the island of Crete – Matala, Vamos, Iraklion – for the sake of hippies, for a peek at a traditional village and to see a minotaur.
Matala used to a hippy paradise at one time and the caves along the beach their home. Like Hampi in India, Matala has shed off its hippy image. Today the small secluded beach feels like your own, a very personal piece of sea and sand. If you fancy a good walk up and down the steep hills you will be rewarded with your own little piece of heaven for the day. Or you could go for a walk in one of the gorges where the mountain goats are your only company.

Vamos is a tiny village, its history dating back to Arabs fleeing Andalusia. Traditional homes that were left to ruin have been lovingly restored. Today these stone and wood homes provide accommodation for visitors. With activities such as cooking, walking, visiting local cheese makers, etc we found it a good break from all the site-seeing we were doing until then.

Iraklion is the capital of Crete and the city itself is dotted with remnants from its Byzantine and Venetian past. I have in an earlier post, already told the story of the old man of Iraklion who will stay in my heart forever!

Iraklion is home to the archaeological site of Knossos, which is considered Europe’s oldest city and belongs to the Minoan Civilisation which was in existence around 2000BC. According to legend, the minotaur, a half bull-half man mythical creature was contained in a labyrinth in Knossos. Archaeologists believe that the Palace of Knossos with its elaborate structure is THE labyrinth.

Our final stop was Athens – for the Parthenon. From ancient structures of historical importance in the Acropolis to the venue of the modern day Olympics, to a white-washed neighbourhood, to modern day government offices built to look like their ancient and grand counterparts, Athens, whose patron Goddess is Athena, history surrounds you like a nice warm blanket. I remember being excited walking around in Chandni Chowk in Delhi, India and thinking to myself that the last Mughal Bahadur Shah Zafar’s son’s wedding procession a few 100 years earlier went down the same road that I was treading on. In Athens, history is a few thousand years old and the excitement is a million times over!

To sum it all up in three words – Greece is GRAND! It is definitely a big potpourri of things to see and do. Like always after a trip, I wish to go back again, some day!